It’s Thursday morning and the choir is singing. The incense burns and the chandeliers light up.

Welcome to the Divine Liturgy at Holy Trinity Orthodox Church on East Main Street in the Miners Mills section of Wilkes-Barre, where around 30 people have gathered to commemorate a holy day – a day when they reflect on the death of Saint John -Baptist.

Years ago, said parishioner Donna Stankiewicz, some people observed a custom on August 29 of avoiding round foods, not using a knife and not eating from a flat plate. These activities were seen as too painful a reminder of the biblical story of the execution of St. John, which says his head was cut off and placed on a platter.

Although this food custom appears to have faded, parishioners have said they are cherishing many more important traditions as Holy Trinity prepares to celebrate its 50th anniversary September 13-15.

“I have the luxury of being flexible,” said Paula Holoviak, of Sugarloaf, after the morning service, explaining that she had organized her class schedule at Kutztown University, where she teaches political science, to give him the freedom to attend Divine Liturgies during the week. .

Singing with a small choir of Holy Trinity parishioners – their ranks swelled by members of the Orthodox Cathedral of the Holy Resurrection who had joined them on the holy day – Holoviak led the song in the absence of the regular choirmaster , who was scheduled to work Thursday morning.

“Receive the Body of Christ; taste the fountain of immortality, ”intoned Holoviak and the other singers as the congregation lined up to receive Communion – one at a time, on a spoon, with two individuals holding a rag to catch any crumbs that might fall, and with the priest holding out the chalice for each communicant to kiss him before leaving.

“This is the centerpiece of our service,” said Reverend Innocent Neal, who has served the church since October. “The body and blood of Christ, the living God. He deserves the greatest respect and honor.

Longtime church members have said they value the connection to the divine they find in Holy Trinity.

“It uplifts you when you have God in your heart,” said Marie Dutko, 84, who came to the service with her husband, Vladimir, who will be 91 next month.

“When you come here, it’s like going to a doctor,” said William Gurka, 89. “You come here and you feel better.”

As the church offers guidelines, Rev. Neal said, “We don’t want it to be about religiosity and obligation, but a way of life that has deep meaning and deep effects. . When the Lord says to be humble and to serve others and to love the world around us, it will have an imprint on your life and on those around you.

The instructions are meant to benefit people rather than help God in one way or another, he added. “God is fine. He doesn’t need our help.

The September 13-15 celebration will commemorate the 50th anniversary of the construction of the Holy Trinity Orthodox Church in the late 1960s.

“We have over 10 acres here,” Gurka said, explaining that the hilly location on East Main Street had plenty of room for the church and parking.

This bundle will undoubtedly be filled this weekend as the anniversary celebration kicks off from 6 p.m. on September 13 with High Vespers and Hymns and Prayers of supplication, known as Litya, for the pre-feast of the exaltation of the Precious Cross.

On September 14, feast of the Exaltation of the Precious Cross, there will be a Divine Liturgy at 9 a.m. and Great Vespers at 6 p.m., followed by a fraternal reception.

On September 15th, a Hierarchical Divine Liturgy will be held at 9:00 a.m. under the presidency of His Beatitude Metropolitan Tikhon, followed by a reception at 10:45 a.m. at the church, 401 East Main St., Wilkes-Bare. A birthday banquet is scheduled for noon at the Holiday Inn Wilkes-Barre – East Mountain, 600 Wildflower Drive, Wilkes-Barre.

Reverend Innocent Neal preaches at Holy Trinity Orthodox Church in Wilkes-Barre, which will celebrate its 50th anniversary on the weekend of September 13-15. 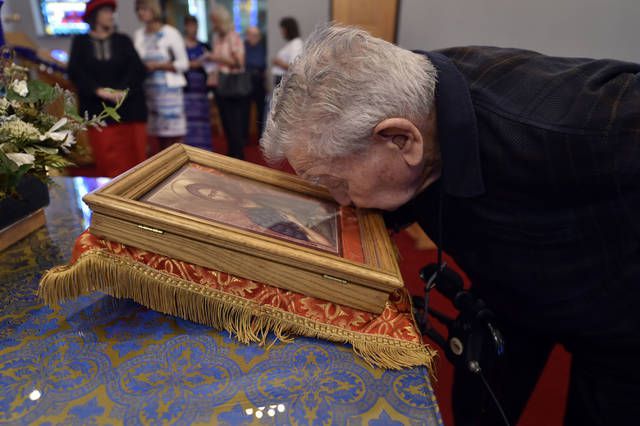 Vladimir Dutko, soon to be 91, kisses a relic at Holy Trinity Orthodox Church on Thursday, a holy day commemorating the death of St John the Baptist. Friends have said that Dutko is the oldest man among the parishioners of Holy Trinity. 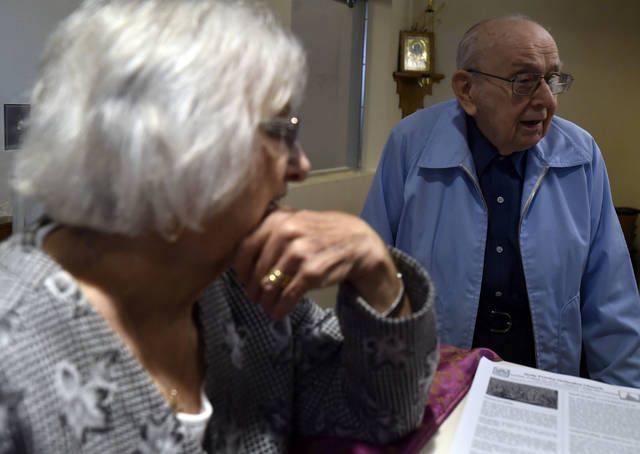 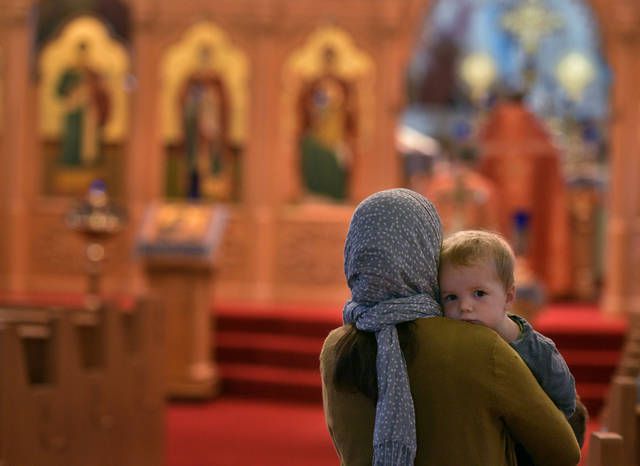 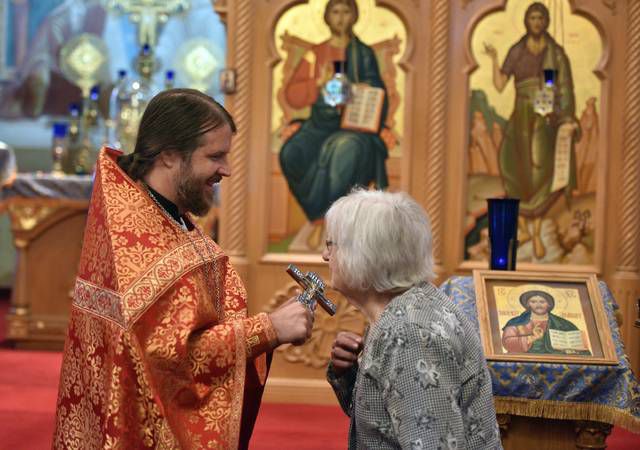 After the Thursday morning Divine Liturgy, longtime church member Mary Dutko was one of many in the congregation to step forward to kiss a cross held by the church’s pastor, Reverend Innocent. Neal.

The main subject, as the title suggests, is the “Throne of Grace” represented in the form of the Trinitarian deity. The Father holds his crucified Son as the Holy Spirit descends on Christ in the form of a dove. May 29, 2018 By Joynel FernandesMasaccio (1401 – 1428), born Tommaso di Ser Giovanni di Simone, […]

A Holy Trinity in ancient Egypt

For most people today, “the Trinity” is a distinctly Christian concept, referring to the Father, the Son, and the Holy Spirit. But as Jennifer Williams, a specialist in African-American studies, writes, it was not the first religious trinity. Christianity borrowed the idea from the ancient Egyptians, making significant changes along the way. Williams notes that […]

The Holy Trinity of ‘Destiny 2’ quality of life issues

Destiny 2 Bungie Generally speaking, I would say Bungie is good enough to address common fan complaints about Destiny 2, from major issues to minor issues. Usually, when a quality of life issue is sufficiently discussed, it ends up being resolved at some point. All sparrows are now automatically summoned! You can apply shaders to […]