After her team’s slow start in the first half of the Region 9 All “A” Classic Championship game on Saturday, Holy Cross women’s basketball coach Ted Arlinghaus delivered a list of expectations for her players.

“Don’t settle. Be the aggressor,” he told them. “Be the one to bring it to the edge. Pressure them. Go play games.

Senior forward Hanna Robinson responded to her coach’s message by scoring 13 points in the second half to give the Indians the momentum they needed to defeat Ludlow, 52-37, at the Panthers’ home court.

Holy Cross earned a berth in the Kentucky All “A” Classic small-school state tournament for the first time since 2019. The Indians will face the 10th-region champion in a first-round matchup at 11:30 a.m. on Wednesday, 26 January at Eastern Kentucky University’s McBrayer Arena.

Brossart won the 10th region championship last year and the Mustangs will face Bracken County in the semifinals of this year’s tournament on Tuesday.

A night after beating Newport Central Catholic in a rematch of last year’s regional title match, Holy Cross got off to a slow start against Ludlow before Julia Hunt and Sarah Bottom landed back-to-back shots that gave them given a 12-9 lead after one quarter.

“We had an absolute battle last night with NewCath. I think it probably has more to do with nerves than anything,” coach Arlinghaus said of his side’s shaky start. 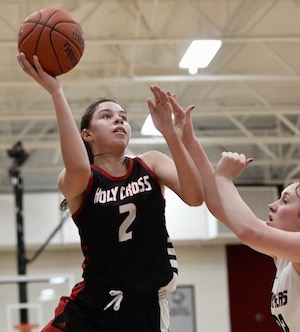 Ludlow turned to his defense in the second quarter, forcing turnovers and missed shots on an 11-5 run that gave the Panthers a 20-17 lead at halftime. Sophomore guard Olivia King scored nine of Ludlow’s 11 points in the quarter, including two straight 3-pointers.

While the first half featured an equal split of scores by both teams, the stars went out in the second half. Ludlow senior forward Jenna Lillard scored seven of her team-high 13 points in the third quarter. One of his baskets gave the Panthers their biggest lead of the night at 26-20.

Holy Cross tied the game at 26 on back-to-back lines of Elizabeth McCoy and Leah Arlinghaus. That’s when Robinson stepped up, scoring 13 points on an 18-7 streak that put the Indians up 44-33 late in the fourth quarter.

“She was one of the ones we sent the message to at halftime,” Coach Arlinghaus said of Robinson, a transfer student from Grant County. “If the jumper doesn’t fall, attack the rim and hit the foul line, and she did.”

Holy Cross ended up beating Ludlow, 19-8, in the fourth quarter to pick up the victory that took their record to 10-6. Hunt received the tournament’s Most Valuable Player award with Robinson and Aleah Arlinghaus joining her on the All-Tournament Squad. Lillard and King were all-tournament selections for Ludlow. 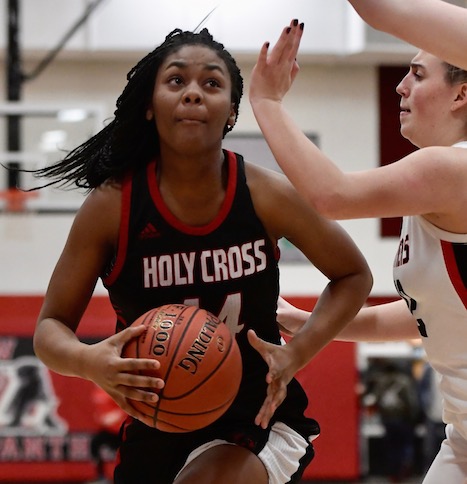 It was the first game Ludlow (12-4) lost on the field this season. The Panthers lost three games in late December due to COVID-19 implications.

Last season, Walton-Verona swept regional titles and the women’s team lost in the All “A” Classic state tournament championship game for the third year in a row.

All Classic “A” Girls Region Tournaments

All Boys Classic “A” Regional Tournaments